These .avi videos were made from the DVDs offered for sale in the media sales section of this website.
They have been tested by a few people using the Windows Media Player (WMP) and Nero's video viewing app.
Mac and Linux users can find .avi players readily available for their systems.
A fast internet connection is necessary to 'stream' video from the website.
If you don't have a fast internet connection then you can download them (use "save link as" type command) at dial up speed
and later view them from your computer.

As of June 2012 these videos  are available on our Youtube account in higher resolution and with audio. Youtube has the ability
to "stream" (ie watch in real time) vs having to download a film and watch it on your computer.
There are utilities available on the web to capture Youtube videos and store them on your personal computer if desired.
(Youtube videos are .flv "Flash" format) 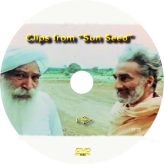 "Clips from Sun Seed" - A large number of short clips taken from the film "Sun Seed". This material was professionally recorded in the early 1970s (possibly after a World Fellowship of Religions Conference) during the construction of the Manav Kendra at Dehra Dun. Most of the material has synchronized audio although there are a few film clips with no accompanying sound track, a few audio tracks with no images, and short periods of film leader, etc. Converted  from a VHS recording, (only a main menu and some chapter marks have been added not in .avi file ). Approximately 17 1/2 minutes. The .avi file is 48 MB.

"Eyes of Light" - Film clips from September 1969 through March 1970 taken in Delhi and Dehra Dun. Photography by David Leeworthy. Approximately 48 minutes.  The .avi file is 133 MB. 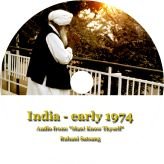 "India - Early 1974" - This is not new material and it has appeared elsewhere in other forms. The collected short film clips were shot around the time period of the Unity of Man Conference (Feb. 1974) and include images from the conference, Sawan Ashram, Manav Kendra and a couple of other outings. It was added to our collection due to the better than average quality of the conversion to DVD. (A main menu and several "chapters" have been added.) The talk "Man! Know Thyself" was used for the audio track although the entire talk is not on the DVD.  Original film clips are courtesy of Lorinda Bloch.  Approximately 50 minutes.  The .avi file is 187 MB.

"Kirpal Singh in Europe" - previously unavailable video of European stops on the 1963-64 and 1972-73 tours. The DVD "menu" is in German (image above) but for the most part is self-explanatory.This .avi movie does not have the ability to jump to chapters however the menu does give the content of the film.
With audio.    Approximately 1:20  ... the .avi file is 239 MB 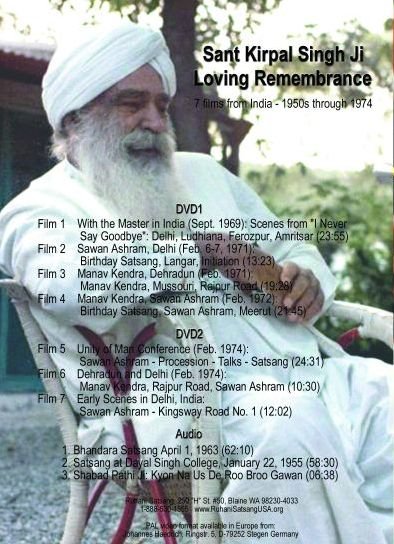 "Loving Remembrance" -  made from previously unavailable film taken in India. Most of the films are from 1969 through 1974 while the final film is from the 1950s. Total run time is 2 hours and 6 minutes.  The source material for these DVDs is 8mm film ("home movies"). The online files are split into the 7 chapters of the original DVDs. All files are .mp4 (ffmpeg codec) vs the previous .avi format. There is no audio with the clips:

This film available on youtube in a higher resolution format and with audio. (Feb. 2012)

"The Message of Kirpal" - Film from the 1972 San Francisco Bay region tour stops ...  film quality varies quite a bit. Included are arrival at the San Francisco Airport, talks from the Unitarian Churches in Berkeley and San Francisco,  talk at the Lovelace home and talk at Santa Clara University. The audio is not synchronized. The first sound track is a narration about Sant Kirpal Singh's Mission. The remainder of the audio is talks given by Kirpal Singh during this tour stop - November 16 Q & A session  and post meditation talks at Santa Clara University and the November 13 evening talk given at the Unitarian Church in San Francisco. Approximately 52 minutes. The .avi file is 110MB.


"16mm Films" - A collection of short 16mm films from the Munich and Innsbruck Satsangs. Approximately 50 minutes. The .avi is 189MB 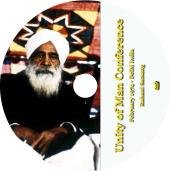 "Unity of Man Conference" -  A "made in India" documentary of the February 1974 Unity of Man Conference. Narration is in Hindi. Converted from a VHS tape, (a main menu and 12 "chapter" divisions have been added). Includes synchronized audio clips of Kirpal Singh, Mrs. Ghandi, Pir Vilayat Inayat Khan and others.  Approximately 50 minutes. The .avi is 175 MB. 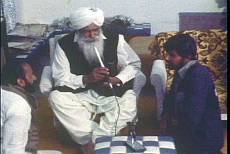 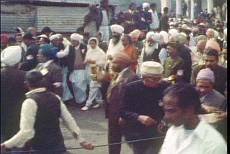 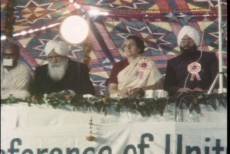 New "Unity of Man Conference 2" -    Additional material from the time of the Unity of Man Conference.  Film with audio
although it was a hand held camera with less than ideal location for most shots. Includes Luncheon after Press Conference, procession before start of
conference,  shots of langar, etc .Approximately 1 hour and  42 minutes. The .avi is 269 MB.


Comments on the Windows Media Player:  although the size of these video frames is relatively small (typically under 300 pixels wide) you can enlarge the video in a couple of ways. First, if you change screen resolution on your monitor to a lower resolution such as 800x600 then the apparent size of the video increases. A free useful utility which can change screen resolution "on the fly" is Multires which can be downloaded at http://www.entechtaiwan.com/util/multires.shtm. The WMP will also resize the display if you "drag" a corner to make the player's window larger or if you click the player's maximize button. Current versions of the media player offer a 200% (2x larger) option.


Please send feedback if you have any questions, problems or comments regarding these files. The rest of the DVD collection will be added as time allows. If you have or know of films that are not available here and you feel should be added to this collection, please use the feedback link to get in touch.